This week I am catching up with two of the previously completed French Fridays with Dorie recipes, Paris Mushroom Soup and Quinoa Fruit & Nut Salad. Going in, I was ready to love the mushroom soup, and was not really sure what to think about the quinoa salad. Boy did I learn a lesson about expectations this week!

The second I saw the Paris Mushroom Soup recipe I was prepared to love it. I like soup, I love mushrooms, all the other French Fridays with Dorie bloggers raved about it, what could go wrong? Granted, if there were a contest for least photogenic FFwD recipe, this one would take the prize, but as any oyster lover can tell you, looks aren’t everything! 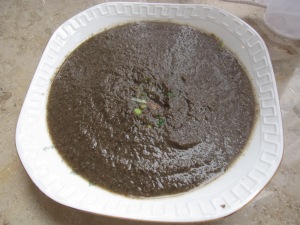 The Quinoa, Fruit, and Nut Salad on the other hand was not speaking to me, and were I not part of this project to cook through the entire book, I can safely say that I would have skipped this one. Not because of the quinoa, which I actually quite like, but the combination with dried fruits & nuts somehow sounded a bit odd to me.

So imagine my surprise when the soup failed to impress and the quinoa salad was a big hit! In fact, I’m so surprised that I didn’t like the soup that I’m just going to assume that I did something wrong with the recipe. But the quinoa salad on the other hand, was great; an absolute cinch to put together, made almost entirely out of pantry staples, nutritious and oh so tasty! Dorie’s recipe is actually more of a guideline and invites you to throw whatever sounds good into the mix. We will definitely be making this one again!

This entry was posted in french fridays with dorie and tagged Around my French Table, salad, side dish, soup, vegetarian, whole grains. Bookmark the permalink.