We are back from vacation (more on that later) and looking forward to the November recipe line up. In the meantime, apparently my auto-post did not work as I had hoped it would while I was away, so here is last week’s recipe. 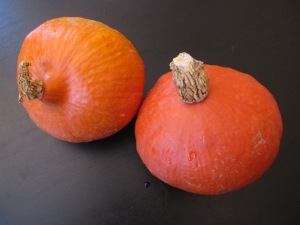 Dorie has named this week’s French Fridays with Dorie recipe, Pumpkin stuffed with Everything Good. If ever a name summed up all you needed to know about a recipe, it is this one. I have been looking forward to this recipe ever since my copy of Around my French Table arrived. The picture (which you can check out along with the complete recipe on NPR’s website) is just too tempting for words.

The “everything good” part of this recipe is a cheesy, garlicky, bacony, creamy stuffing, which is roasted for a couple hours in a hollowed out pumpkin. Somehow the picture made this recipe look far more complicated than it actually was, as the prep work turned out to be quite quick.

The only modification I made was to roast two little baby pumpkins instead of one big one, assuming that individual portions would be easier both to serve and eat. The other benefit which I discovered was that my little pumpkins cooked in 90 minutes instead of the 2 hours recommended for a larger one. They also fit perfectly into soup bowls for serving, which helped to hold them together as we ate and looked just way too cute on the table. And the taste? Yum! We will be making this recipe again, I am already drooling over some of Dorie’s Bonne Idees.

Only one word of warning, this is a very hearty and filling recipe. Dorie indicates that a 3 pound pumpkin will make 2 very generous servings and she is not kidding. Even with my smaller pumpkins (which came to 1 pound each) I could only finish half of my portion. No worries though, the leftovers were delicious! 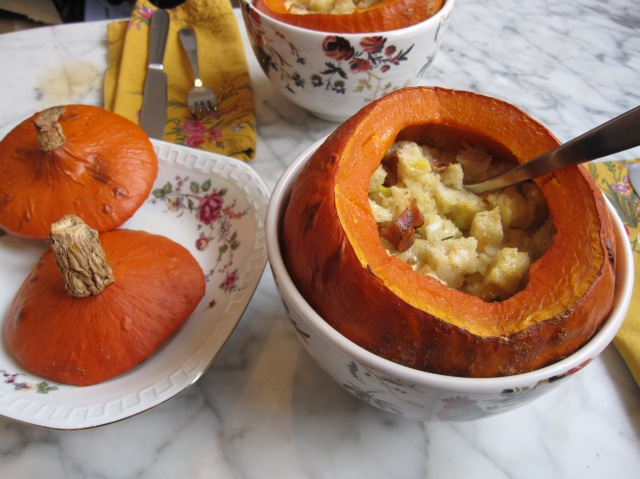 I also can’t help but mention here (and I hope he doesn’t mind) that this is not the first stuffed squash to have come out of my oven this month. One of our fellow FFwDers over at Of Cabbages & King Cakes recently posted an absolutely delicious recipe for Squash baked with Sausage & Apples which I served to rave reviews. I used bratwurst for the sausage and a hokkaido pumpkin and the flavors were just perfect together. I encourage you to check it out.

This entry was posted in french fridays with dorie. Bookmark the permalink.