My husband has been a big supporter of my French Fridays with Dorie adventures. He loves to eat and is generally very open to different foods. He has gamely tried every single recipe I have made and lent a hand in the kitchen on more than one occasion. This project has reminded me just how lucky I am to have found a man who isn’t a stereotypical meat-n-potatoes-only type. In fact, just two weeks ago, as he was scarfing down the sardine rillettes, I had to smile and say a silent little thank you to cupid.

And then there are those other times when I am reminded that he’s still a guy after all, and that some stereotypes exist for a reason. The last time I was reminded of this fact was at the beginning of April, when we were discussing the FFwD line up for the month…

But, moving on. Did anyone else notice that there were no pictures in the book for any of this month’s recipes? What’s up with that? I like pictures. It gives me a visual goal to aim for. Thank goodness for google, which gave me a variety of pictures to chose from, all clearly painting the picture that this week’s French Fridays with Dorie recipe, Navarin Printanier, is a lamb stew. To be specific, lamb stew made with spring vegetables.

Does spring stew sound weird to anyone else? Isn’t stew supposed to be winter fare? Am I the only one?

Well, I was the only one in my house because my husband loved this dish. The lamb was tender, the veggies were flavorful, and even I was impresses by how tasty the sauce was. He was thrilled to finally get a little “real food” and I thought it was probably the best lamb stew I had ever eaten. Which is as high a compliment as stew can get from me. Especially in April. 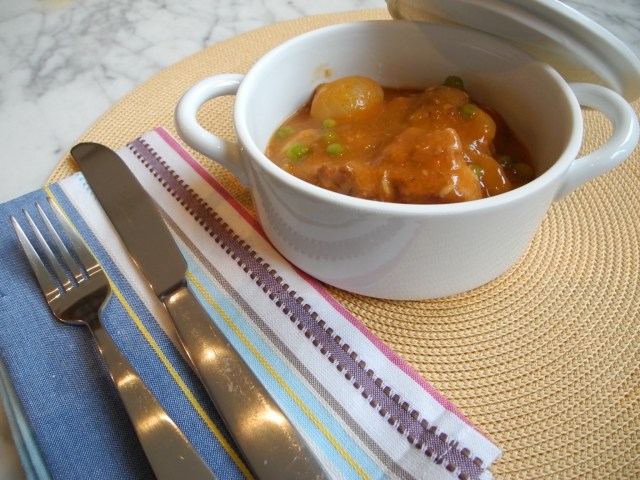 This entry was posted in french fridays with dorie and tagged Around my French Table, lamb, main course, seasonal - spring. Bookmark the permalink.