I have a love-hate relationship with German Sundays. 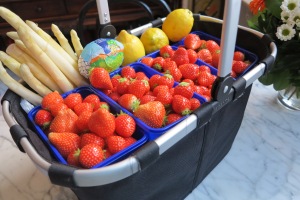 On the one hand, I love the fact that all of the shops are closed and one is rather forced to take the day off and relax. Seriously, you couldn’t run errands even if you wanted to because pretty much everything is closed except for restaurants and gas stations. It’s actually very relaxing.

On the other hand, I hate the fact that ALL the shops are closed and you can’t run even a  basic errand. If, say, just as a random example, you messed up the lemon curd for this week’s French Fridays with Dorie recipe, and wanted to buy more lemons and eggs to try the recipe again, well, you’re out of luck. 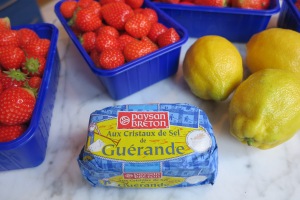 So, yeah, I might have messed up the lemon curd for Dorie’s Sable Breton Galette with Berries. To try to explain that in english, it’s a big old chewy butter cookie/cake thing, topped with lemon curd and berries. Doesn’t that sound delicious! Not entirely sure what went wrong with my curd, but it just wouldn’t thicken up and ended up more like lemon syrup than curd. Tasty, but not really suitable for spreading.

But I had found real Breton butter and wasn’t about to give up on this one without a fight. Luckily I had some cream kicking around in the fridge and decided to use that instead. The only problem was, once I added the cream and took my first bite, all I could think was, it’s strawberry shortcake. Not that there’s anything at all wrong with that!

Seriously, this was delicious. I loved the cookie/cake thing. It was good enough to eat all by itself. With the cream and berries, it was heavenly. I just need to give that lemon curd another try.

This entry was posted in french fridays with dorie and tagged Around my French Table, cake, cookies, dessert. Bookmark the permalink.