I served this week’s French Fridays with Dorie recipe, Two Tartines from La Croix Rouge, for breakfast. Here’s why that’s not weird.

So I’m sure everyone has encountered the occasional continental breakfast in their lifetime. Usually these are fairly lackluster hotel affairs which leave you wondering why you bothered. But, have you ever wondered why the name “continental” is applied? Well, over in Europe they have the Brits and the Irish out there on their islands, and then there’s the continent. On the islands breakfast was traditionally a fairly hearty affair. I have enjoyed many an Irish and English breakfast. I particularly like the beans which feature in the English version. It sounds so out of place, but they are really very tasty. And then there was what the Brits referred to as continental breakfast, which, logically, is what one got for breakfast when visiting the continent.

Over time the term seems to have been abused and expanded to cover a multitude of sins, but the traditional continental breakfast is made up of bread, cheese, sliced meats (usually ham), yogurt, fruit, juice, and coffee or tea. Maybe a hard boiled egg, but nothing fancier. And, while I can’t speak for the rest of the continent, this is indeed a fairly standard breakfast offering around these parts. The key, as with so many things, lies in the ingredients. And where can you find better bread and cheese than on the continent? 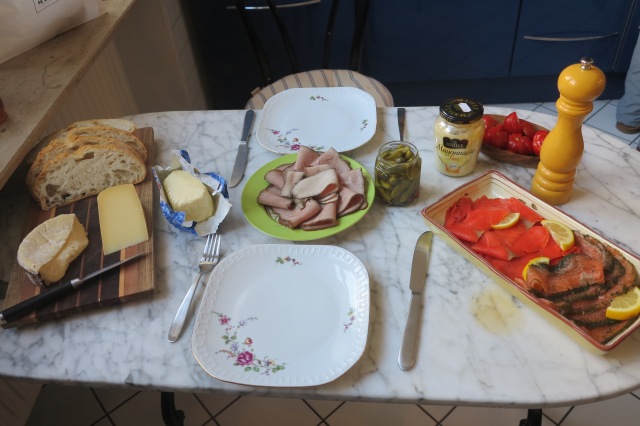 This is why I read this week’s recipe and instantly thought, breakfast! My husband didn’t even bat an eye. My local deli had 4 different kinds of salmon, 10 different kinds of ham (!), and exactly one small offering of roast beef, hidden away in the back. That should give you an idea of local tastes. We bought two of the salmons, settled for any roast beef we could get, and considered ourselves lucky. 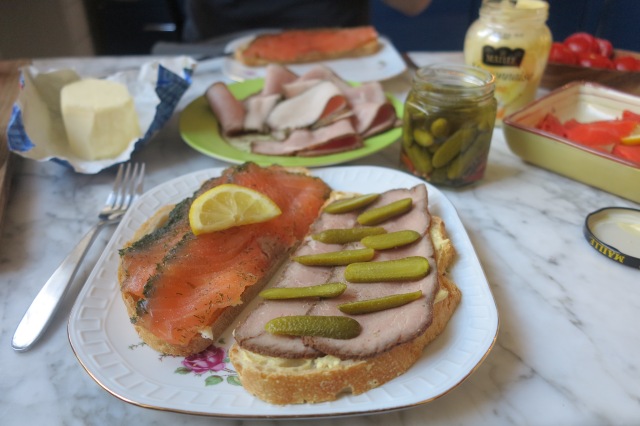 And may I just say, breakfast was delicious!

This entry was posted in french fridays with dorie and tagged Around my French Table, breakfast, german food, the european kitchen. Bookmark the permalink.