From the moment my husband saw the ingredients list for this week’s French Fridays with Dorie recipe, Quiche Maraichere, he started lobbying for change. I’m sure he thought that he was being subtle about it, “Don’t you think some sausage would be a great substitute for, oh, I don’t know, say the bell pepper?”. To be honest, he’s probably right, it probably would have been very tasty, but that’s not the recipe we’re making this week.

Nope, this week we made a very veggie filled quiche. Even the word quiche is a bit of a stretch because there were barely any eggs in there, mostly just pastry crust filled with veggies. At this point you might be agreeing with my husband and wondering why I didn’t follow his suggestion to jazz it up a bit. To be honest, I was starting to wonder myself.

And I started to wonder even more after the darn thing was still malingering in the oven a good 20 minutes past the recommended cooking time, and still wasn’t puffed at all! My crust was starting to burn and my side dish (quinoa w/ goat cheese & spinach) was already long done and getting cold. It had already been a long day, I was hungry, and I just wasn’t in the mood for a recipe to step out of line. I made myself a plate of quinoa, thinking that it might be the only thing we were going to get for dinner that night, and left the kitchen in a huff.

Some time later, I’m not even sure how long in total, my husband called me into the kitchen. I walked in, still a bit grouchy, to find that he had taken the quiche out of the oven (beautifully puffed), had moved some flowers to set the backdrop, and was trying to take pictures for me. How sweet is that! I couldn’t stay grouchy after that. 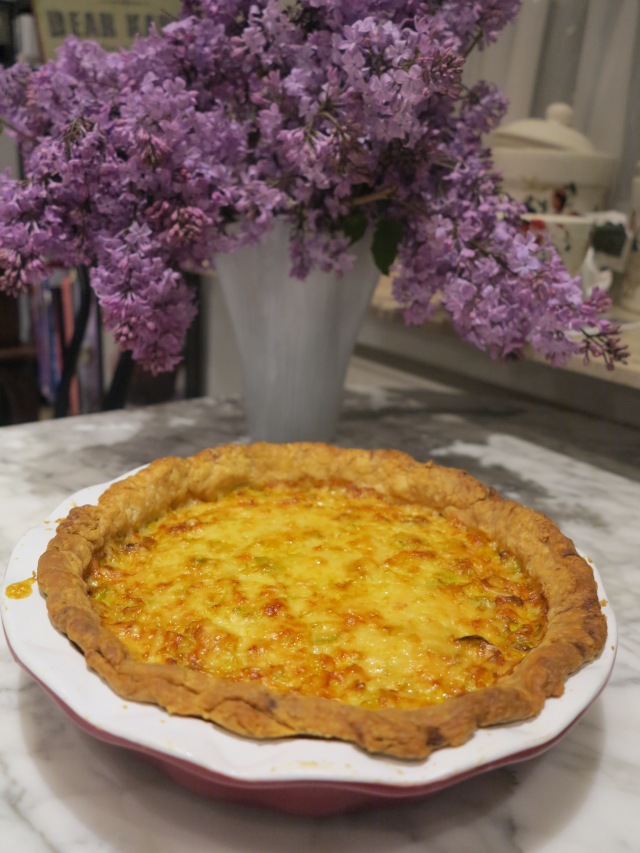 The quiche, by the way, was delicious. I was rather surprised myself that such a bland list of ingredients could come together into something so simple and tasty.

This entry was posted in french fridays with dorie and tagged Around my French Table, vegetarian. Bookmark the permalink.