Say it with me… I’m NEVER moving again! In less than 15 hours the movers will arrive to cart all of our worldly belongings to our new apartment, and at this point, I am just exhausted beyond caring. Are you impressed that I’m still participating in FFwD this week? Don’t be. This is an act of pure procrastination.

I’m not usually one to get emotionally attached to “things.” I’ve spent years abusing my two pack rat brothers, both of whom seem physically incapable of throwing anything away. But this move is proving a bit more emotional that I had expected. This was my first home in Germany and my first home together with my husband. It’s where I learned that he likes his tea black and his coffee loaded with as much milk and sugar as possible, and that neither is apparently considered an appropriate substitute for breakfast (this was news to me). That the Germans are very proud of their bread (rightly so, by the way), and that if the house was burning down, he’d probably grab the watercooker first.

It’s where I learned that things are a little different across the pond. Ovens are smaller, pillows are bigger, and closets don’t exist. The first floor is on the second floor. The butter is stronger, the flour is weaker, and brown sugar = soft sugar = a trip to the specialty British store on the other side of town. It’s been quite a ride and I’ve actually come to love my little blue kitchen. 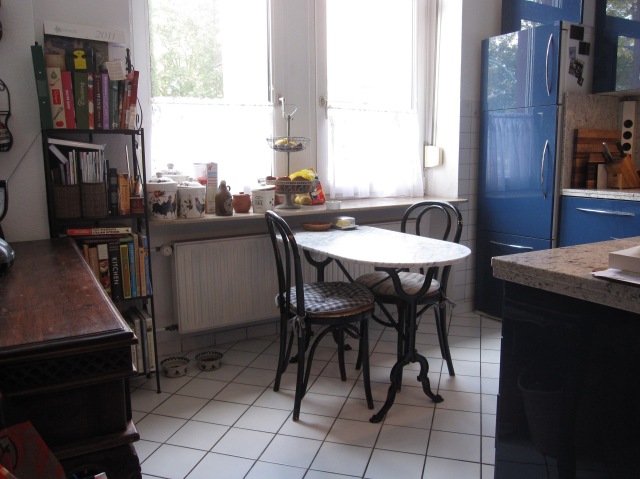 This week’s French Fridays with Dorie recipe was the last official real meal made in that kitchen. Somewhere in the pile of boxes that surrounds me is photographic proof that I made it. But my husband was in charge of packing the electronics and now I have no idea where my camera is. You’ll just have to believe me. I made it, it was very good, we will make it again.

This entry was posted in french fridays with dorie, life in germany and tagged Around my French Table, side dish, vegetarian. Bookmark the permalink.