double celery soup and a roadtrip

Probably sounds like an odd combination and they are not in fact really connected. Except for the fact that we got back from our trip to Slovakia and Poland last weekend and last week’s French Fridays with Dorie recipe, Celery-Celery Soup was the first thing on the menu. The soup was tasty, but since you’ve all already made it, I’ll spend this post talking about our trip instead. As for this week’s Monk Fish and Double Carrots recipe, it’s currently simmering away on the stove, more about that later.

If I’m being honest, Poland has never ranked particularly high on my list of places to see. Yes, I do in fact have a list. It is very long and ever-growing. Poland only even made it onto the list after we became neighbors, and even then it took me nearly 8 years to wander over to say hello. Not very neighborly of me, I know.

But a few weeks ago we set off via a rather roundabout route through Slovakia. In Slovakia we visited charming villages and fortified ourselves with delicious garlic soup before visiting the castle from the classic vampire film, Nosferatu.

We soaked in vibrant Krakow while noshing our way through a fabulous market selling all manner of tasty treats, our favorite being a polish version of stuff on toast. 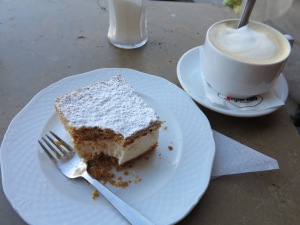 We turned our visit to beautiful Wroclaw into a multi-day cafe crawl.

On the Czech border we viewed a chapel decorated entirely with human bones and found the best pierogi of the entire trip, so far off the beaten path that we may well have been truly lost. Aparently our noses for good food are more finely tuned than our navigation system:-) 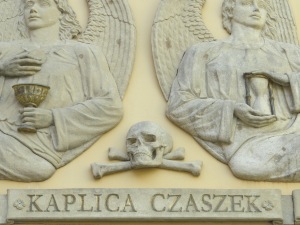 And so much more. We got a glimpse into the horrors of Auschwitz-Birkenau, visited a beautiful “Peace Church” built as part of a treaty between warring Catholics and Lutherans, toured numerous castles and ate some wonderful food. The marks of the past are still there, but from what I saw, things are looking up and we had a wonderful time. What can I say, it turns out that the neighbors are quite nice.

This entry was posted in french fridays with dorie and tagged Around my French Table, expat life. Bookmark the permalink.

10 Responses to double celery soup and a roadtrip