Food aversions have been a topic of conversation around French Fridays with Dorie before. It seems that most of us have a few of them lingering from childhood and I am hardly an exception, mine just seem to be a bit less common perhaps than others. For example, I have no problem with coconut or the dreaded liver and I’m generally indifferent to bell peppers. However, my little nose has been known to turn up at the sight of cooked carrots and any form of cured or preserved fish. Over the course of 4 years of cooking along with this group I have been introduced to some fabulous new flavors and come to accept a few which I hadn’t particularly appreciated before. In fact, of all the meals we have made for friends over the years, the one which we are most often asked for a copy of is the Salmon in a Jar recipe!

At the same time, I have also reconfirmed some previously held dislikes, and stewed meat is one of them. With few exceptions, this may well have been my least favorite section of the book. My husband on the other hand loves stew in seemingly all its forms and has delighted that I have had a reason to make it for him. He’d better soak it up now because most of these have gone into my “once was enough” category and I don’t think that we have too many more to do. 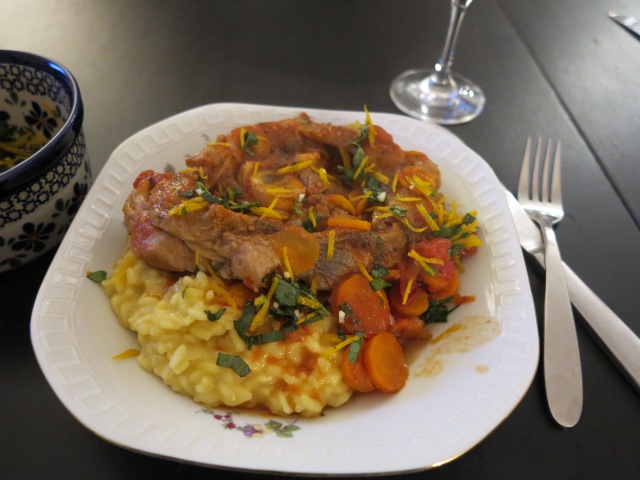 Which brings us to this week’s recipe, Osso Buco a l’Arman. Dorie writes that the traditional accompaniment for osso buco is saffron risotto. Who am I to argue with tradition? Besides, it’s ben an awfully long while since I’ve made risotto and it gave me something to do while the main was loitering in the oven. Our resulting meal was delicious. I enjoyed the sauce with my risotto, my husband loved the osso buco and commented on it several times as being “really good!” and we both thought that the gremolata was a nice touch. 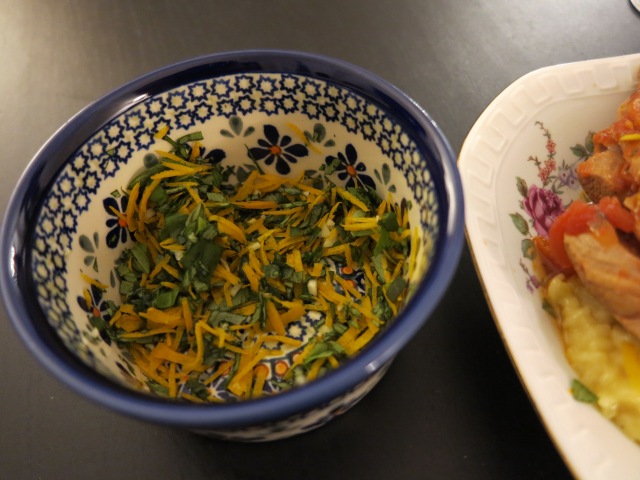 So who knows, maybe I’ll make it again for him one of these after all. It’s a relatively inexpensive cut of meat around here and not all that difficult to make. But not soon.

This entry was posted in french fridays with dorie and tagged Around my French Table, main course. Bookmark the permalink.

18 Responses to osso buco a l’arman