Viande des what now? This week’s French Fridays with Dorie recipe sent me directly to Google to figure out what in the heck we were eating. Turns out that Viande des Grisons, or Bündnerfleisch as it is known in German, is air-dried beef from southeast Switzerland, which is often served with raclette. Somehow that last bit was news to me, because we’ve been serving raclette to our New Year’s Eve guests for years now and never thought to serve it with Bündnerfleisch. Now we know.

I may have never heard of this particular meat before, but the lady at my local delicatessen didn’t even bat an eye when I asked if she had it, she just asked me how much I wanted and then proceeded to slice me off 100 grams worth. 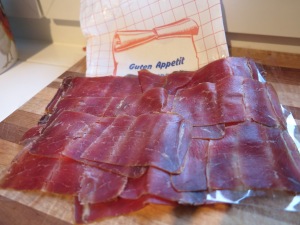 I opened up the package immediately when I got home and tried a piece. My initial though was, okay, but not really exciting. The flavor is pretty similar to a hundred other varieties of cured meats found in and around the Alps. My husband, on the other hand, is a huge fan and is always bringing back whatever local variety from our hiking and skiing trips. So, I thought, at least he’ll enjoy this recipe.

Later that same day I put a pot of lentil soup on to cook. The darn recipe needed an hour and a half and after the first step of browning the sausage, I was starving! So I decided to make myself a little mini tartine to tide me over for the next 90 minutes.

Well, what a difference a little bread, butter, and walnuts makes! I munched my way through my first little tartine, and about half an hour later (with an hour still to go until dinner) I made myself another. Then my husband got home and of course wanted one. And then we made another batch for breakfast the next morning, and finally remembered to take a picture. 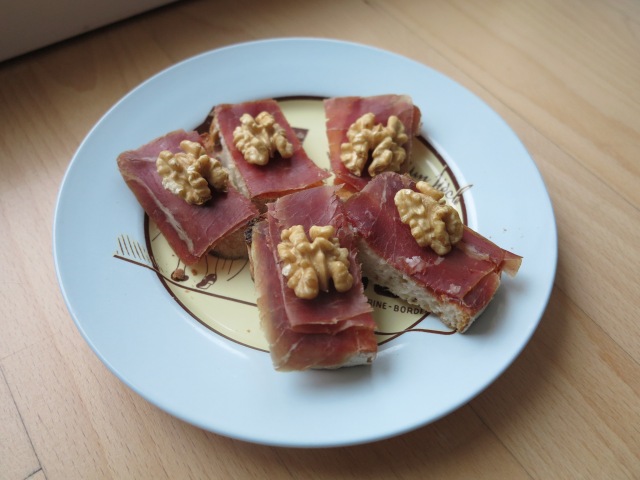 By now it should be clear that this one was a huge hit in my house. We will make it again. The lentil soup, on the other hand, not so much. I’ll stick with Dorie’s lentil soup recipe from now on.

This entry was posted in french fridays with dorie and tagged Around my French Table, finger food. Bookmark the permalink.