We returned home from vacation on Monday to find that our internet/phone connection had gone out at some point while we were away and it was not restored until late yesterday. Over the course of the week I discovered that four days is a very long time to be without internet access. It turns out that I really don’t know how to do anything without the internet anymore… including cook! You see, this week’s French Fridays with Dorie recipe, Cold Melon-Berry Soup, is one that I have never cooked before, and one which I had no idea how (or more to the point, with what) to serve.

The only time I have ever eaten melon soup before was as one of the courses of a multi-course tasting menu at a nice restaurant, and since my husband and I don’t tend to get that fancy at home, I was completely lost as to how I should serve this soup. Is it an appetizer? A dessert? A light lunch? The portion size looked way too small to hold its own as a main course, so in the end I decided to serve it for breakfast. And since one of my favorite summer lunches is sliced melon with cured ham, I decided to serve it alongside toast topped with prosciutto. 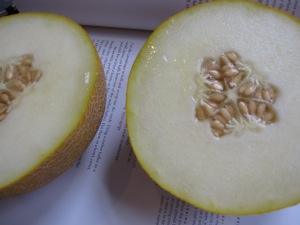 With my menu plan worked out I headed off to my local produce stand and promptly hit my next roadblock, which is that they did not have any cantaloupe. I guess this should not have been a complete surprise since cantaloupe is not always available around here, but I thought for sure that in the middle of summer it would not be a problem. C’est la vie I guess, or as the Germans would say, so ist nun mal das Leben! Instead I bought something which is simply called “melone” in German, and which looks similar to cantaloupe on the outside, but has a pale yellow flesh and a slightly milder flavor. If anyone knows what we call this english, please let me know. 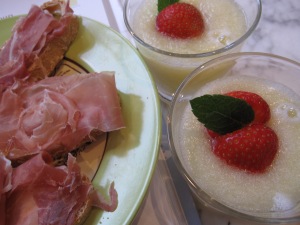 And after all that, the recipe itself was a cinch. It took me probably 5 minutes to throw the soup together, and then the only thing left to do was to let it chill in the fridge overnight. The prosciutto toast proved to be a tasty combo, but I am very interested to see how everyone else served this soup. I find that to be one of the best parts of participating in this online cooking group, finding weekly inspiration in what all of the other cooks are whipping up!

Edit: After giving google.de a shot (which is probably where I should have started to begin with) it turns out that the melon I used is a Galia melon. According to the brilliant minds at Wikipedia, Galia melons come from Israel and are a cross between a cantaloupe and a honeydew, which would explain why it looks like a cantaloupe but tastes like a honeydew.

This entry was posted in french fridays with dorie and tagged Around my French Table, seasonal - summer, vegetarian. Bookmark the permalink.