My German mother in law is one of those cooks who never uses a recipe and wouldn’t know how to give you a recipe if you asked. I know this because I have tried to ask, and her response is always to pull me into the kitchen to watch as she adds a little of this, a little of that, now a little more of this, stir it all together until it reaches the “right consistency”, cook until it “looks done” and serve.

What I find even more entertaining is her response any time my husband asks his mother for a recipe. She will hear the question come out of HIS mouth and will then pull ME into the kitchen for a demonstration. We have tried pointing out that her son is a perfectly competent cook, but this seems to have little effect. I have yet to decide if she does this because she thinks that cooking is women’s work or if she just doesn’t trust her son in the kitchen. In either case we have learned that I need to be present if we want to get a recipe out of her. 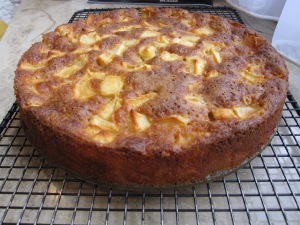 So I had to laugh when I read Dorie’s introduction to Marie Helene’s Apple Cake, in which she bemoans the fact that getting recipes out of the french home cook is equally difficult. Though, let me assure you right now that Dorie seems to have done a pretty darn good job, because this is one of my favorite recipes in the book.

In fact, this cake was one of the first recipes I made from Around my French Table. At the time I was not yet part of French Fridays with Dorie, heck, I didn’t even own the book. But after seeing the recipe posted last autumn on David Lebovitz’s blog, and more importantly, after seeing his mouth-watering photo, I set out to make the cake right away.

And now that it is once again apple season, I couldn’t help but pull this recipe out again. This time around I was out of rum so I threw in kahlua instead. And you know what, still delicious. David suggests a dollop of creme fraiche to go with it and I may indeed have to give that a try. But in the meantime, it’s also darn good all by itself.

I’m going to have to encourage you to check out David’s photos and not to rely on mine. I made this at night and didn’t have any natural light for a good picture. I took a couple safety shots and figured that I would get some better pictures the next day. But then my husband’s jogging buddies stopped by after their morning run and I woke up to this…

Which I guess means that they liked it!

This entry was posted in french fridays with dorie and tagged Around my French Table, cake, dessert, seasonal - autumn. Bookmark the permalink.