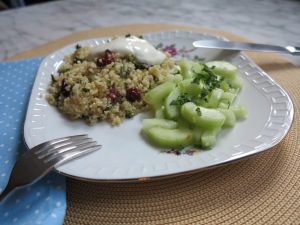 I finally have a camera again! I’m so excited. So excited in fact, that I almost forgot to take a picture of this week’s French Fridays with Dorie recipe, Crunchy Ginger-Pickled Cucumbers. Maybe I’m just out of practice after a month of picture free posting. Or maybe it’s the fact that I was home from vacation in the states for exactly one day before I had to pack my bags again for a business trip. Yep, here I am, typing up this week’s post from a hotel room in Amsterdam.

But on my one day home I did manage to get in this week’s recipe. After a week of feasting on all my favorite foods in Chicago (why is it that we never miss the healthy stuff) I thought that Dorie’s light and easy side salad was just what the doctor ordered. I paired it with another Dorie recipe which has become a staple in my house, Quinoa, Fruit, and Nut Salad.

Dorie’s pickled cucumbers were incredibly easy (thank goodness because I don’t think that I could have handled a complicated one this week) and pretty quick too. My husband really enjoyed them and said that he would like to make them again. As for me, I maintain a general indifference to cucumbers, which this salad could not shake me out of. I neither love them nor hate them. Though I will say that this salad was far better than I expected. And pretty too! 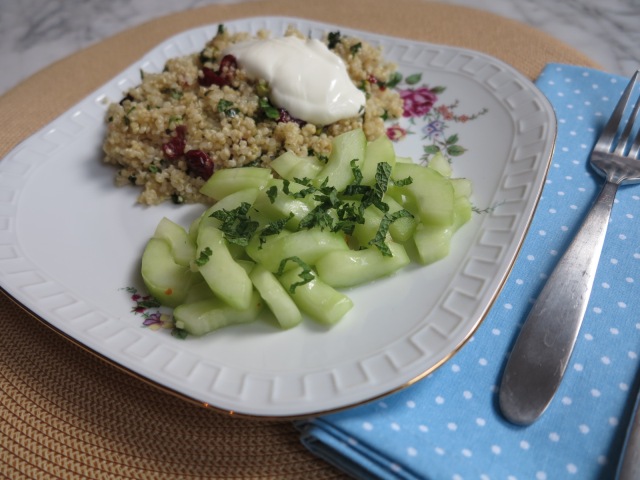 This entry was posted in french fridays with dorie and tagged Around my French Table, side dish, vegetarian. Bookmark the permalink.