Almost, but not quite 🙂

Yes, we are back from our trip to Georgia and Armenia and I can report that we had an amazing time. The weather was perfect, Tbilisi and Yerevan were so much fun, and oh, I’m almost ashamed to tell you how much I ate…

Almost, but not quite 🙂

But we’ll have to save that for another post because today is Friday and that means I need to post this week’s French Fridays with Dorie recipe, Chicken Basquaise. Basquaise, as it turns out, means a whole lotta peppers. Did you know that? I didn’t know that. Not sure where I’ve been, but apparently it hasn’t been to Basque Country.

I’m not gonna lie, I was pretty skeptical about this recipe, primarily because my usually easy-going husband’s lips clamp shut at the mere hint of bell peppers. I resigned myself early on to the fact that I would probably be eating alone this week. Oh well, I wouldn’t be the first Dorista to encounter this particular problem.

But wouldn’t ya know it, Dorie has gone and seduced my husband. When I try to cook with bell peppers he turns his little nose up, but when Dorie suggests cooking with bell peppers (lots and lots of bell peppers), he actually deigns to try it. AND he even liked it! How do you like that?

So in short (if that’s even possible this far into my post) this one was a surprise hit in my house. My husband went back for seconds and I agreed that it was quite tasty. It did take an awfully long time to get on the table and ranks among the less photogenic recipe in the book. But all in all, quite a tasty dinner. 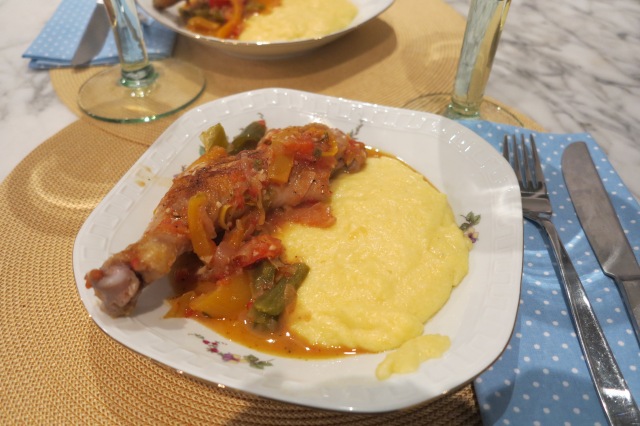 This entry was posted in french fridays with dorie and tagged Around my French Table, main course, poultry. Bookmark the permalink.