It’s rather ridiculous really. I have been living in Germany for almost 6 years, and the first time I am making spätzle is from a french cookbook written by an american author. To say that my german husband was skeptical would have been the understatement of the year.

Yep, a few weeks ago my fellow French Fridays with Dorie cooks went into their kitchens to whip up up a batch of Herb-Speckled Spätzle. I was still in my post holiday stupor and/or traveling for work, I can’t really remember why I missed that particular week. But as one of only two Doristas in Germany, it didn’t feel right to skip this one completely.

So there I was this past week, trying to figure out how to make spätzle without a spätzle maker. After assessing all of the available kitchen implements at my disposal, I settled on the steamer basket. We put some of the dough into the basket, then set it over the boiling water and used a flexible spatula to press the dough through into the boiling water. I can’t say that it was the perfect method, but it seemed to get the job done without too much difficulty.

Now, the typical preparation that one finds in Frankfurt is covered in onions, bacon, and cheese. It’s a kind of german mac-n-cheese and it requires a very hearty appetite. Dorie took a different route and has us sauteing the fresh noodles with onions, lots of mushrooms, and some chicken broth. A magical combination which came together into an absolutely delicious side. Yes, even the german was impressed! So impressed that I recently caught him checking the price of spätzle presses online. And Dorie, with a kitchen as small as ours, that’s mighty high praise! 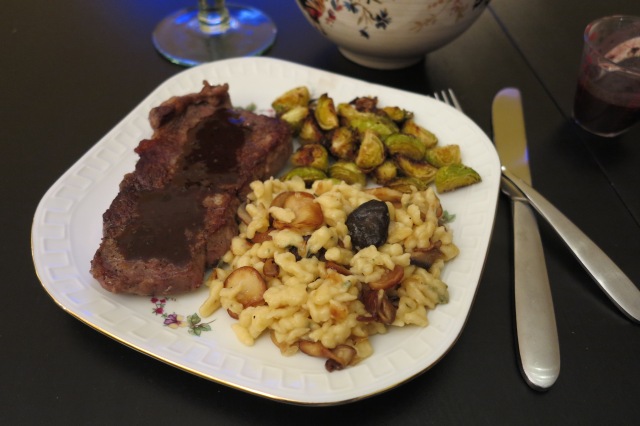 This entry was posted in french fridays with dorie and tagged Around my French Table, dessert, seasonal - autumn. Bookmark the permalink.