My home network is FINALLY back online. All in all, it wasn’t down for much longer than a week. But considering how things are all tied together now, one week is a VERY long time to be without a land line, television, and internet. The withdrawal shakes started after only two days. By day seven I would have sold my soul for one episode of Jon Stewart.

But in my information starved state, at least I didn’t starve. As a matter of fact, I somehow had much more time than I normally do, and put it to good use whipping up this week’s French Fridays with Dorie recipe, Coupetade, a.k.a. French Toast Bread Pudding. 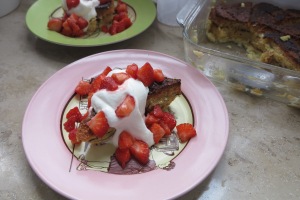 So it’s like this: first you make some french toast, and then you make it into bread pudding. Sounds like a tasty brunch idea actually. Instead of maple syrup, I topped mine with cream and strawberries, because the berries are so gorgeous right now and I can’t seem to go more than a day without gorging on them.

My husband loved it. I was not as big a fan. Not sure why as I usually love bread pudding. But now that I have my internet back, I just can’t be bothered to spend too much time wondering why. After all, Jon Stewart is waiting.

This entry was posted in french fridays with dorie and tagged Around my French Table, breakfast, dessert. Bookmark the permalink.