The name of this recipe is Compote de Pommes Two Ways. Basically, Dorie gives us a very basic recipe for apple sauce (way 1), and then tells us that we can just leave it on the stove for another hour or so and see what happens (way 2). I’ll be honest, as I was cutting up my apples and putting them on to cook, I still had no idea which way I was going to do. 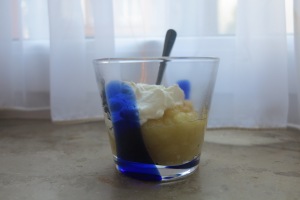 So I cooked the apples until the were done the first way and tried them with a bit of yogurt. Yep, it was apple sauce. Tasty, but hardly anything to write home about. Ok, let’s try the second way.

An hour later, my apples were thicker, but still pretty much the same color. For some reason I had expected them to get a bit darker. Dorie suggests adding vanilla and salted butter. I may have made a snide comment about “only in France do they add butter to apple sauce.” But that was before I tasted how delicious it was. I tell ya, those French know a thing or two about food.

But it was still a lot of apple sauce. I mean, I eat a lot of yogurt, pretty much every morning in fact, but how much apple sauce do I really need. So I decided to use half of it to make a cake. Not just any cake. But Dorie’s Double Apple Bundt Cake from her Baking book. What can I say, it was an appley kind of weekend.

In the end, the one that stuck with me was the second apple sauce. I had it pretty much every morning this week for breakfast with yogurt. And it was really delicious. Worth being glued to the stove for 1 and a half hours? Ouch, hard to say. But maybe.

This entry was posted in french fridays with dorie and tagged Around my French Table, breakfast, seasonal - autumn, side dish, vegetarian. Bookmark the permalink.