As you may have heard, I was a bit confused last week and made the soups instead of the baked apples. Oops. Not sure why, but there I was on Sunday night, trying to drum up the energy to make three (count them 3!) soups. I had all of the ingredients on hand, but it had been a very busy weekend and when dinner time rolled around I was just too tired and couldn’t be bothered. I headed into the kitchen thinking that I would pull a leftover soup out of the freezer and save the Dorie recipe for another night.

Upon entering the kitchen I noticed that Dorie’s book was lying on the kitchen table, already open to this week’s recipe. Apparently I hadn’t bothered to put it away after making my grocery list. Out of either curiosity or procrastination I started reading the recipe and noticed that, while I might not have the energy to make all three soups, making one seemed like hardly more effort than reheating frozen soup. Seriously!

And it wasn’t. I opened two jars of stock and brought them to a boil. Roughly chopped a zucchini, opened a bag of frozen peas (no asparagus to be found around these parts this time of year) and cooked them in the stock for 10 minutes. A quick blitz in the blender. Done! I think I was in the kitchen for no longer than 15 minutes and we had steaming bowls of tasty soup for dinner.

The next night I made the broccoli and red pepper soups after I got home from work and found them to be equally satisfying. All three recipes checked the all important Easy, Quick, and Nutritious boxes for me. In fact, this week was an important reminder that foundation recipes, by which I mean the most basic form of any recipe, can be really quite satisfying. I could have dug around in my fridge and added cream or chopped ham or fresh herbs, or all of the above, and no doubt these additions would have been delicious. But the soups were also perfectly good on their own, without any refinement.

And maybe I’m the only one, but I take comfort in the idea that after a long day, if I come home to only a few limp veggies in the crisper, or even just some forgotten bags in the freezer, I can still feed the ones I love. It may not be fancy, but it’s better than frozen pizza, and I like to keep my expectations low. I’m pretty sure that it’s the secret to a happy life:-) 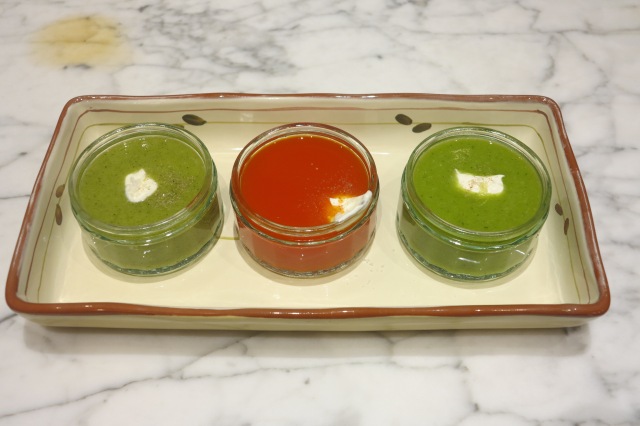 This entry was posted in french fridays with dorie and tagged Around my French Table, soup. Bookmark the permalink.