Our refrigerator is in a dire state these days. The prime problem seems to be that we have been away from home every weekend since we returned from the States. Which means that I’ve been trying to squeeze these French Fridays with Dorie recipes in during the work week and have been awfully grateful that the line up so far has been for quick dishes.

This week’s recipe was actually for Spice-Crusted Tuna. As you can see from the title, I went a little off course and selected a nice monkfish fillet instead. Otherwise, I stuck strictly to the recipe, even following Dorie’s advice to serve it with mashed potatoes and Mango Chatini.

The only problem I had with this one was that the spice crust stuck to the pan instead of to the fish and I had to scrape it out after the fact in order to get the flavor on my fish. I thought that maybe it was because I didn’t use a spatula to turn the fish. Diane pointed out that it may be because I oiled the fish before adding the spice rub. Either way, I think that I still got the flavor, it just didn’t look quite as photogenic as it might have.

In fact, the flavor was delicious and I particularly enjoyed the combination with the mango chatini. I will absolutely be making the mango again, I have the feeling that this delicious salsa would pair nicely with most white meats.

What can I say, while I’m sorry to see that some Doristas are suffering, I’m absolutely thrilled that we are finally getting around to these fish recipes. I’m one who will usually stear towards the fish dishes over the meat dishes in a restaurants. Not always, sometimes a good steak is all that will satisfy. But my general preferences seem to be holding because so far I note that I have rated the recipes in Dorie’s fish chapter far higher than those from the meat chapter. Keep em coming! 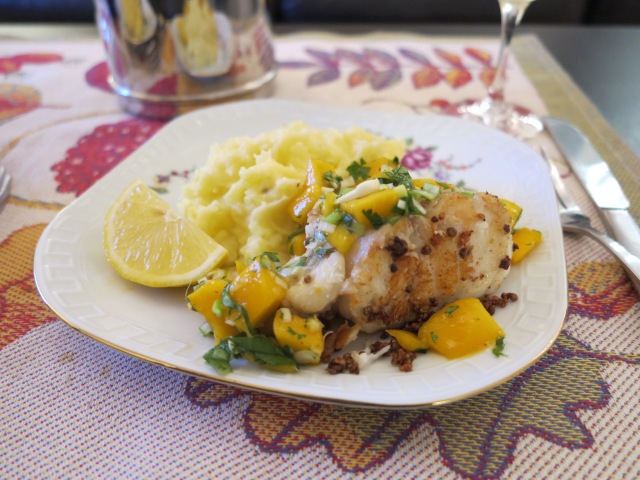 This entry was posted in french fridays with dorie and tagged Around my French Table, fish, main course. Bookmark the permalink.