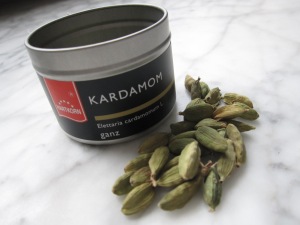 The cows are mad, the birds and pigs have the flu, and now in Germany we are experiencing a rather serious E.coli outbreak.

Apparently they have decided that it’s the Spanish cucumbers which were to blame, but for basically the entire past week we were avoiding all fresh fruits and vegetables while the authorities tried to track down the source of the problem. And having to avoid fresh produce at this time of year, when the local strawberries and asparagus are at their peak, is nothing short of cruel! So thank goodness that my first posted French Fridays with Dorie recipe is a simple rice side dish, with no scary cucumbers required.

This week’s recipe is Cardamom Rice Pilaf, which calls for using the seeds from whole cardamom pods, as opposed to the ground variety which I already had in my spice drawer.To be honest, I had never even seen whole cardamom pods before, but they proved to be easy to find (if not easy to pay for) at my local grocery store.

Now, my husband and I love rice and eat it on a regular basis. Our standard recipe comes from the New Mayo Clinic Cookbook by Maureen Callahan and Cheryl Forberg, one of our most used and abused cookbooks. But we both agreed that the Mayo recipe will now be sharing plate time with Dorie’s recipe. It was just an incredibly simple side with minimal ingredients which came together to create a very tasty dish. The one and only change I made to Dorie’s original recipe was to use brown rice, which did require a longer cooking time, but was otherwise equally simple.

All in all, we will definitely be making this one again, and that is the highest praise a recipe can receive in our household!

This entry was posted in french fridays with dorie and tagged Around my French Table, New Mayo Clinic Cookbook, side dish, whole grains. Bookmark the permalink.