Canned pumpkin is something of a commodity for canadian and american expats living in continental europe. Rumors regarding sightings in local grocery stores abound, but I for one have yet to see it in a single store anywhere in Frankfurt.

Most of the big grocery stores here have a tiny section  dedicated to english speaking expats, meaning that my peanut butter is sold alongside jars of marmite and vegemite. I must admit that this section of the grocery store fascinates and confuses me. The “american” goods one can consistently find include peanut butter, Fluff (in two flavors no less), maple syrup, Pop Tarts, Cheez Whiz, Mac-n-Cheese, and some boxed cake & brownie mixes. Now, while some of these products are useful, others are items which I can’t imagine ever missing. But before anyone accuses me of food snobbery, let me clarify that my biggest problem with this section of the store is not with what they DO stock, but rather with what they DO NOT stock. Things like brown sugar, double-acting baking powder, pecans, chocolate chips, vanilla extract, graham crackers, good cheddar cheese, and yes, canned pumpkin! And yes, I know that there are work-arounds for most of these, but honestly, if we can find room on the shelf for cheez whiz, why not canned pumpkin?

Phew, sorry about that. This is one of those topics which can really get me going. I’ll wrap up by saying that if you ever find yourself living on this side of the pond (excluding the United Kingdom since they seem to use many of the same baking ingredients as the americans) the internet will become your best friend.

So why did I start this post again? Ah yes, Pumpkin Gorgonzola Flan, a previously completed French Fridays with Dorie recipe which I am just now catching up with. I have been looking forward to this recipe since my copy of Dorie’s book arrived in the mail. Pumpkin, blue cheese, and walnuts… yum, I was in love before these tasty little flans even made it out of the oven. The end result was creamy and delicious. I served it with a side salad, but this would have made a great side dish as well.

Now for the all important question, would I make these again? Was it worth using up a can of my hard searched for pumpkin (because I am apparently far too lazy a cook to bother making pureed pumpkin from scratch)? 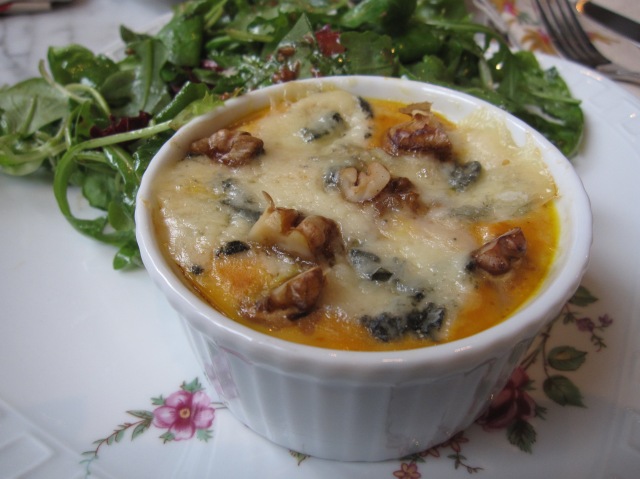 This entry was posted in french fridays with dorie, life in germany and tagged Around my French Table, expat life, seasonal - autumn, side dish, vegetarian. Bookmark the permalink.