Well here we are, the dreaded week. This week’s French Fridays with Dorie recipe is… dum dum dum… Sardine Rillettes. Some of you may have noticed by now that I am actually the one who was crazy enough to nominate this recipe and, given the panic that it seems to have invoked, I feel the need to submit a plea in my defense.

You see, it was not that long ago that Tuesdays with Dorie wrapped up. I never participated in TwD, but I was certainly aware of it and read a few of the articles which came out as it was coming to an end. The end of TwD had me thinking about where our little group will be in 3 years as we are wrapping up French Fridays with Dorie, and I was wondering which recipes we would be making together in those final months. And suddenly it occurred to me, the way things are going, with us voting each month for our favorite recipes, the end might be a little scary. Because really, is chopped liver ever going to win a vote? I don’t think so. Aspic? Not a chance! But this project is about cooking the entire book and that means that all those scary recipes have to come up some time. Would we rather sprinkle them in with the others or do we want to save them all for the end?

Well, I don’t know about the rest of you, but I would rather have a nice chocolate mousse, or that gorgeous cover recipe, to look forward to at the end of this project. Does this make sense? Is anyone else with me? Can we agree to make some of these scary recipes before the end? I really hope that I’m not the only one because, while I may be brave enough to nominate sardines, I don’t think that I have it in me to nominate aspic. Someone else might have to step up for that one

All right, enough procrastinating, bring on the sardine rillettes (recipe published here). Maybe now would be a good time to point out that rillettes, a dish usually made with pork, is basically just a meat spread. Kind of like a pate, but the consistency is not as smooth and you should be able to see the shredded chunks of pork.

Having heard that sardines vary greatly in quality I decided that I would give this recipe a fighting chance and buy the most expensive sardines I could find, which frankly, were not all that expensive. In the end I ended up buying the ones in the prettiest tin… check it out, cool huh? But once the tin was open, no longer so pretty. At that point the only one who was excited about this dish was the cat who, having heard the sound of a can opening, starting twirling himself around my feet, hoping to get a taste of whatever was being made. Let’s just say it… the fact that the cat was interested in this recipe did not bode well for it. 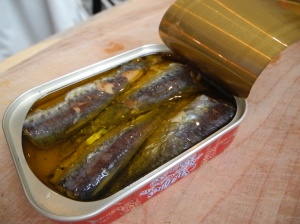 But I bravely (if also a little squeamishly) drained and deboned the little fishies and set them aside while I mixed up the rest of the ingredients: fresh cheese, shallots, scallions, lime juice, and some chopped herbs. Without the sardines, it was actually looking quite tasty. But I couldn’t ignore the sardines forever, so I finally added them in and mixed everything around. It is at this point that Dorie suggests that we taste test the mixture to see if it needs more seasoning or citrus. For the briefest of moments I actually thought about letting the cat do the taste testing for me, but then I remembered that I’m a grown up. Darn.

We served our sardine rillettes with toasted baguette and assorted antipasti. All in all a quick and simple weeknight meal. Dorie has once again shown me that I need to be a little bolder in the kitchen and not be so easily frightened by a scary sounding title.

And yet, oh Dorie, I am still dreading the aspic.

This entry was posted in french fridays with dorie and tagged Around my French Table, fish, starters. Bookmark the permalink.