I must have had a premonition that November would be tough because I made the full month of recipes as soon as they were announced. Which is lucky because since then we have had very little time for cooking.

Duck is always a happy dish in our house. It’s one of my husband’s very favorite meals and, since he is the duck pro in our house, it means that I don’t have to cook:-)

Dorie calls this week’s French Fridays with Dorie recipe, Pan-Seared Duck Breasts with Kumquats, a simpler version of duck a l’orange. I know that it’s an old classic, but somehow I’ve never actually had duck a l’orange. I think that by the time I had enough money to eat in the kinds of restaurants which would have served such fancy fare, the dish had been replaced. 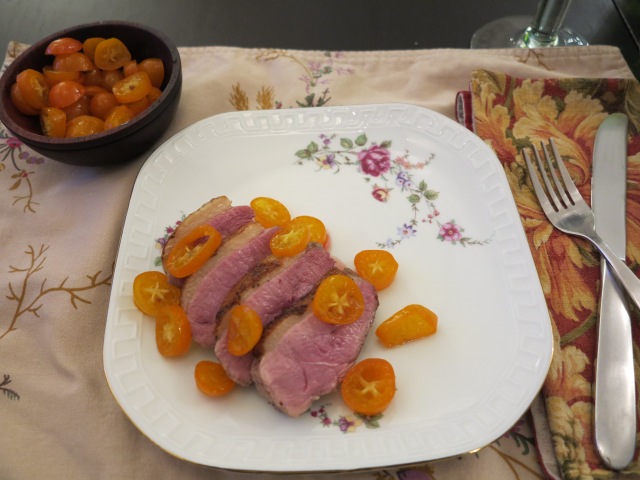 In this simpler version, Dorie has us candying sliced kumquats and serving them alongside the seared duck breasts with a balsamic reduction. To complete the orange theme, we paired the duck with an orange rice pilaf. The duck was perfectly cooked and the sauce was absolutely delicious. Husband approved!

This entry was posted in french fridays with dorie and tagged Around my French Table, main course, poultry, seasonal - winter. Bookmark the permalink.